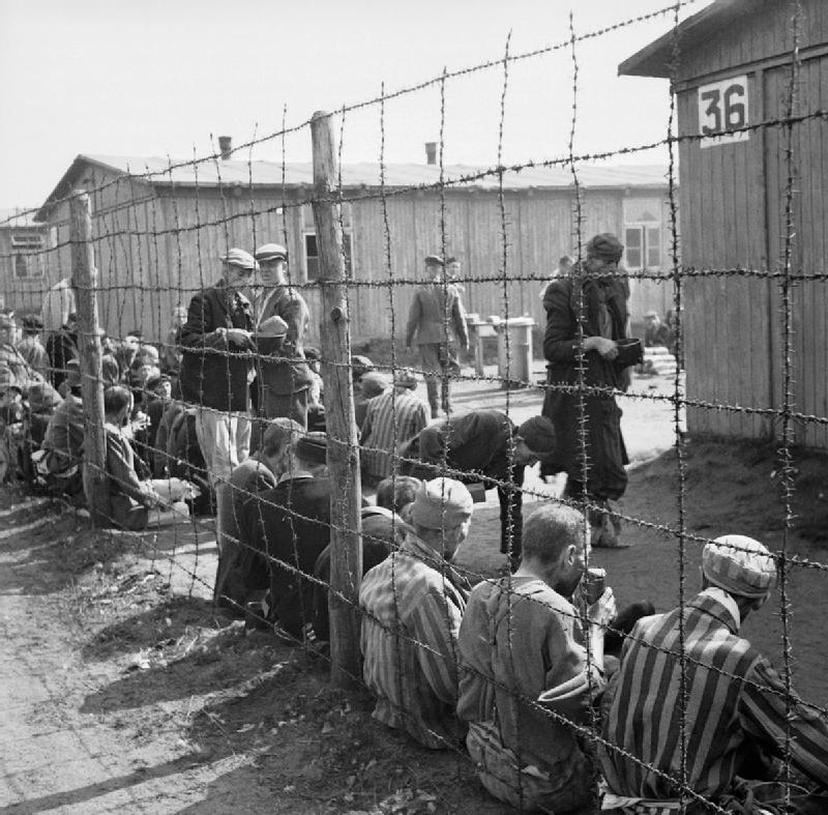 
The sky was gloomy that morning as we waited anxiously.  All the men, women and children of Piotrkow's Jewish ghetto had been herded into a square. Word had gotten around that we were being moved. My father had only recently died from typhus, which had run rampant through the crowded ghetto. My greatest fear was that our family would be separated.

'Whatever you do,'  Isidore, my eldest brother, whispered to me, 'don't tell them your age. Say you're sixteen.'

I was tall for a boy of 11, so I could pull it off. That way I might be deemed valuable as a worker.

An SS man approached me, boots clicking against the cobblestones. He looked me up and down, and then asked my age. 'Sixteen,' I said. He directed me to the left, where my three brothers and other healthy young men already stood.

My mother was motioned to the right with the other women, children, sick and elderly people.  I whispered to Isidore, 'Why?'  He didn't answer.

I ran to Mama's side and said I wanted to stay with her.  'No,' she said sternly.  'Get away. Don't be a nuisance. Go with your brothers.'  She had never spoken so harshly before. But I understood: She was protecting me. She loved me so much that, just this once, she pretended not to. It was the last I ever saw of her.

My brothers and I were transported in a cattle car to Germany.  We arrived at the Buchenwald concentration camp one night later and were led into a crowded barrack. The next day, we were issued uniforms and identification numbers.

'Don't call me Herman anymore.' I said to my brothers. 'Call me 94983.'  I was put to work in the camp's crematorium, loading the dead into a hand-cranked elevator.  I felt dead. Hardened, I had become a number.

Soon, my brothers and I were sent to Schlieben, one of Buchenwald 's sub-camps near Berlin.

One morning I thought I heard my mother's voice.  'Son,' she said softly but clearly, I am going to send you an angel.'  Then I woke up. Just a dream. A beautiful dream.  But in this place there could be no angels. There was only work. And hunger. And fear.

A couple of days later, I was walking around the camp, around the barracks, near the barbed-wire fence where the guards could not easily see. I was alone.  On the other side of the fence, I spotted someone: a little girl with light, almost luminous curls. She was half-hidden behind a birch tree.  I glanced around to make sure no one saw me. I called to her softly in German. 'Do you have something to eat?'

I inched closer to the fence and repeated the question in Polish. She stepped forward. I was thin and gaunt, with rags wrapped around my feet, but the girl looked unafraid. In her eyes, I saw life.  She pulled an apple from her woolen jacket and threw it over the fence.  I grabbed the fruit and, as I started to run away, I heard her say faintly, 'I'll see you tomorrow.'

I returned to the same spot by the fence at the same time every day. She was always there with something for me to eat - a hunk of bread or, better yet, an apple.  We didn't dare speak or linger. To be caught would mean death for us both.

I didn't know anything about her, just a kind farm girl, except that she understood Polish. What was her name? Why was she risking her life for me?  Hope was in such short supply, and this girl on the other side of the fence gave me some, as nourishing in its way as the bread and apples.

Nearly seven months later, my brothers and I were crammed into a coal car and shipped to Theresienstadt camp in Czechoslovakia...'Don't return,' I told the girl that day. 'We're leaving.'  I turned toward the barracks and didn't look back, didn't even say good-bye to the little girl whose name I'd never learned, the girl with the apples.

We were in Theresienstadt for three months. The war was winding down and Allied forces were closing in, yet my fate seemed sealed.

On May 10, 1945, I was scheduled to die in the gas chamber at 10:00 AM.  In the quiet of that day's dawn, I tried to prepare myself. So many times death seemed ready to claim me, but somehow I'd survived. Now, it was over.  I thought of my parents. At least, I thought, we will be reunited in the after life.

But at 8 a.m. two hours before I was to die...there was a commotion. I heard shouts, and saw people running every which way through camp. I found and caught up with my brothers.

Russian troops had liberated the camp! The gates swung open. Everyone was running, so I did too. Amazingly, all of my brothers had survived; I'm not sure how. But I knew that the girl with the apples had been the key to my survival.

In a place where evil seemed triumphant, one person's goodness had saved my life, had given me hope in a place where there was none.  My mother had promised to send me an angel, and the angel had come.

Eventually I made my way to England where I was sponsored by a Jewish charity, put up in a hostel with other boys who had survived the Holocaust and trained in electronics. Then I came to America, where my brother Sam had already moved. I served in the U. S. Army during the Korean War, and returned to New York City after two years.  By August 1957 I'd opened my own electronics repair shop. I was starting to settle in.

One day, my friend Sid who I knew from England called me...'I've got a date. She's got a Polish friend. Let's double date.'  A blind date? Nah, that wasn't for me.

But Sid kept pestering me, and a few days later we headed up to the Bronx to pick up his date and her friend Roma.  I had to admit, for a blind date this wasn't so bad. Roma was a nurse at a Bronx hospital. She was kind and smart. Beautiful, too, with swirling brown curls and green, almond-shaped eyes that sparkled with life.  The four of us drove out to Coney Island . Roma was easy to talk to, easy to be with.

Turned out she was wary of blind dates too!  We were both just doing our friends a favor. We took a stroll on the boardwalk, enjoying the salty Atlantic breeze, and then had dinner by the shore. I couldn't remember having a better time.  We piled back into Sid's car, Roma and I sharing the backseat.

As European Jews who had survived the war, we were aware that much had been left unsaid between us. She broached the subject, 'Where were you,' she asked softly, 'during the war?'

'The camps,' I said. The terrible memories still vivid, the irreparable loss..I had tried to forget. But you can never forget.

She nodded. 'My family was hiding on a farm in Germany, not far from Berlin ,' she told me. 'My father knew a priest, and he got us Aryan papers.'  I imagined how she must have suffered too, fear, a constant companion. And yet here we were both survivors, in a new world.

'There was a camp next to the farm.' Roma continued. 'I saw a boy there and I would throw him apples every day.'

What an amazing coincidence that she had helped some other boy. 'What did he look like? I asked.

'He was tall, skinny, and hungry. I must have seen him every day for six months.'  My heart was racing. I couldn't believe it.  This couldn't be.

'Did he tell you one day not to come back because he was leaving Schlieben?'

Roma looked at me in amazement. 'Yes!'

I was ready to burst with joy - and awe flooded with emotions. I couldn't believe it! My Angel!

'I'm not letting you go.' I said to Roma. And in the back of the car on that blind date, I proposed to her. I didn't want to wait.

'You're crazy!' she said. But she invited me to meet her parents for Shabbat dinner the following week.

There was so much I looked forward to learning about Roma, but the most important things I already knew: her steadfastness, her goodness and her gift of mercy toward others. For many months, in the worst of circumstances, she had come to the fence and given me hope. Now that I'd found her again, I could never let her go.

That day, she said yes. And I kept my word. After nearly 50 years of marriage, two children and three grandchildren, I have never let her go.

Reflection Stories Salutes author Herman Rosenblat for fulfilling his lifetime marriage vows to Roma.  And commends Roma for her amazing steadfastness and goodness …by coming to The Fence, in terrible circumstances, she gave Herman HOPE!  May we all emulate this kind of total commitment to our Faith, Family and Friends!